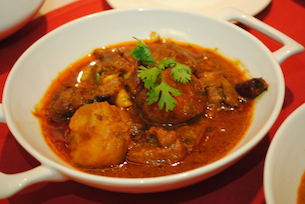 Anglo-Indian cuisine – "one of the world's first fusion cuisines"

From these beginnings, ‘Anglo-Indian cuisine’ – blending European cooking techniques and recipes with local spices, ingredients and methods – took shape and eventually made their way from the Indian sub-continent to the supper clubs of ‘Old Bombay,’ from the 1910's through the 1940's, that came to be known as the "old Raj." Over time, some of the well-known Anglo-Indian dishes would include chutneys, salted beef tongue, kedgeree, ball curry, fish rissoles, and mulligatawny soup.

In New York City, Bombay Bistros, at 31 Cornelia Street, in Manhattan's Greenwich Village neighborhood, is such an Anglo-Indian styled Indian restaurant. Bombay Bistros is a slightly smaller space than its elder sibling, The Drunken Munkey at 338 East 92 Street, higher up on Manhattan's East Side. Bombay Bistros sports a narrow and cozy interior, with seating that is firm and cushiony to ease back onto and relax. 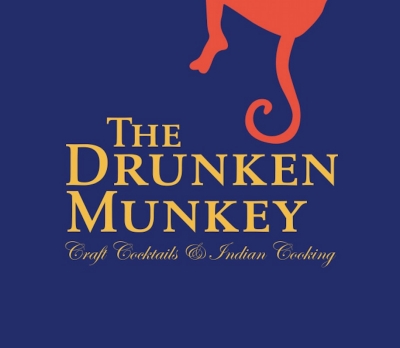 Occupying the same space as the Mario Batali Italian restaurant, Po, that closed its doors in 2017, Bombay Bistro has an all-day dining menu that is served until the late hours. It will include an extensive selection of appetizers and shared plates. You can expect a selection of Paneer Tikka, Crispy Okra, Jumbo Tandoori Prawns, Crispy Aloo Tikki, Tandoor Grilled Lamb Chops, Braised Yorkshire Short Ribs – all served with appropriate choices of sides. The bar will offer full dining options in addition to shared plates on a separate bar menu. A rotating list of daily specials will complement in-house dining.

But beyond the Anglo-Indian cuisine offered, the Bombay Bistros (similar to The Drunken Munkey) also excels in artisanal cocktail offerings. In a departure from other fine dining restaurants, it really goes out of its way to make the art of the craft cocktail a centerpiece of its offerings. Highlighting the dining room and semi-open kitchen, the full-service cocktail bar offers classic artisanal cocktails, forming the heart of the ‘East India Cocktail Program’. Expect to indulge yourself with Aviation Cocktail, Classic Champagne Cocktail, Dark and Stormy, Old Fashioned, Pimm's No 1 Cup, Singapore Sling, and other favorites.

A variety of these specialized cocktails are prepared using proper mixing techniques, incorporating fresh juices, tinctures, bitters, etc. The bar will carry rum and whiskey selections including select Indian distillations, as well as aperitifs, fine wines and champagnes, satisfying ports, digestifs and a limited but quality selection of craft style beer. Bombay Bistros only adds onto the success of it's elder sibling, The Drunken Munkey, as well as the connected international chain of fine liquor and cigar lounges, Bar and Books. It is a destination to strongly consider for cocktails or dining.

Saravanaa Bhavan
81 Lexington Avenue, New York, New York 10016
Phone: 212-679-0204
The menu of this international restaurant focuses on the strictly vegetarian dishes of South India like the Adai Aviyal, a dish often made in Kerala.
Email:
www.saravanaabhavan.us

Tamarind Tribeca
99 Hudson Street, New York, New York 10013
Phone: 212-775-9000
Indian Cuisine with a contemporary touch. Known earlier as the Tamarind Restaurant in the Flatiron section of Manhattan and the recipient of a Michelin star.
Email:
www.tamarindtribeca.com

Vatan
409 Third Avenue, New York, New York 10016
Phone: 212-689-5666
A vegetarian Gujarati meal is the focus of Vatan. To make the meal more enjoyable, the entire premises is made to look like an Indian Village.
Email: Use contact form (https://vatanny.com/contact-us/)
www.vatanny.com