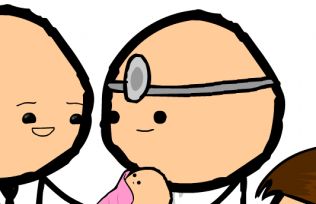 Cyanide & Happiness began as a small series of comics drawn by Kris Wilson. It was eventually showcased on the Comicaze website, and then on Sticksuicide.com, "a website devoted to animations and games graphically depicting the violent deaths of stick figures", which was founded by Rob DenBleyker in 2004.