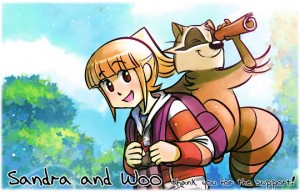 Sandra and Woo is a comedy comic strip featuring the 13-year-old girl Sandra North and her mischievous pet raccoon Woo. Sandra lives together with her single father Richard in an unnamed town in the north of the United States. Woo is able to speak, but only talks with Sandra since he’s afraid to end up in a laboratory otherwise. While most strips are just supposed to be funny or tell an exciting story, some also deal with more serious topics. We also want to show what growing up means for Sandra and her best friends in middle school, Cloud and Larisa.

Another regular feature of the comic are Woo’s trips to the forest to meet his furry friends Shadow (a fox) and Sid (a squirrel) and his love interest Lily. Since 19 November 2011, the Sandra and Woo website also hosts Knörzer and Andini's fantasy webcomic Gaia, which follows the adventures of several graduates of an elite academy after a deadly attack during graduation ball.

Sandra and Woo: a webcomic about friendship, life and the art of (not) eating squirrels
Tweets by CoolFireTech
Copyright © 2002 - 2022 Cool Fire Technology LLC