Mark Cuban vs. Donald Trump: their feuds, their business ventures 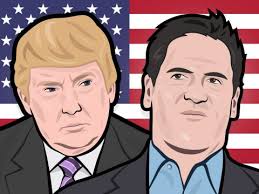 In mid-September of 2016, in the midst of the intense struggle of the year's presidential election cycle, tech billionaire Mark Cuban called out real estate billionaire and Republican nominee to the presidency, Donald Trump, to take part in a one-on-one debate for Trump to provide detailed responses to Cuban’s questions about his economic policy proposals. The challenge from Cuban stemmed from Trump's response to a Fox Business interview a week earlier between Cuban and host Neil Cavuto in which Cuban stated, “In the event Donald wins, I have no doubt in my mind the market tanks.”

Trump had a chance to respond while being interviewed by Fox's Maria Bartiromo where he replied, "Well, I know Mark and you know, the problem with Mark, he is not smart enough to understand what we are doing. He's really not smart enough, in my opinion, to really understand what's going on. I've known him for a long time. He tweets me all the time." In Mark Cuban's issued challenge to Donald Trump, he even offered to make a $10 million charitable contribution to a charity of Trump's choice (Trump is known to have outstanding pledges to various charities). Terms of the check disbursement were later changed by Cuban to permit Trump to keep the money rather than give it to charity.

Of course, besides Mark Cuban, Donald Trump is known for dissing other celebrities and famous names in sometimes nasty public spats over the years.

But both Trump and Cuban are animated, brash and bombastic billionaires, and they have feuded with each other for quite some time. Though it is difficult to pinpoint exactly when and over what circumstances the feud sprouted to life from, one version of the story has it that it began when the real estate mogul called Cuban's "The Benefactor" television show a blatant copycat of the "The Apprentice." It escalated when Cuban claimed he could write a bigger check, based on his cash flow rather than net worth than Trump could. Trump, Cuban said, threatened to sue him. "I have no debt," Cuban told Playboy. "I told my lawyer, 'Let's pray to God he does sue,' because how much fun would that be? He would have to disclose everything. It was 'I'll show you mine, you show me yours.' But he never pursued it."

Following below is a quick glimpse at their business holdings and focus on the types of industries the two billionaires are involved with.

The Trump Organization is a privately owned international conglomerate that serves as the principal holding company for Donald Trump's business ventures and investments. The operation has interests in real estate development, investing, brokerage, sales and marketing, and property management. Through an array of arrangements, and in varying degrees of involvement, the company owns, operates, invests, and develops residential real estate, hotels, resorts, residential towers, and golf courses in different countries, as well as owning prime Manhattan real estate. With

regard to the real estate sector, many developers pay Donald Trump to market their properties and be the public face for their projects. For that reason, Trump does not own many of the buildings that display his name. A financial market investment portfolio is an active part of the holdings, as a portion of Trump's wealth is concentrated in the financial and commodities markets, and this investment portfolio generates income and cash flow from a variety of mechanisms as dividends, capital gains, and compounded carried interest.

Though too numerous to categorize for this article, listed below are some of the more prominent business dealings of The Trump Organization, with valuations omitted. So here is a cherry-picked assortment of the many varied Trump Organization ventures.

Mark Cuban vs. Donald Trump: their feuds, their business ventures