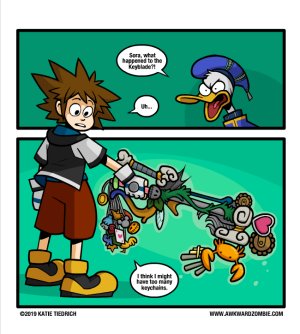 Awkward Zombie, a video game themed webcomic by Katie Tiedrich. It often makes reference to video game culture thus sometimes requiring a bit of video game literacy. The comic is non-sequential, with no main characters or plotlines, and can be read out of order. There are gag-a-day parodies of ridiculous situations that could occur in video game worlds such as The Legend of Zelda, Pokémon, World of Warcraft, Red Dead Redemption, the Metal Gear series, and others, but some include the author herself as a character. Generally, except for limited strips, the title does not suggest a persistent pattern of recurring zombie lore.